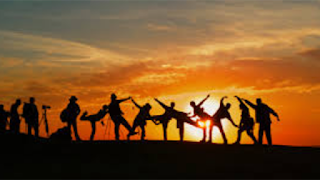 When was the last time you were properly on trend? Ahead of the curve? Finger on the pulse?

For me, it was probably back in the late eighties, when I was an early adopter of the leg warmer, fingerless black lace gloves and the puff ball skirt.

I've made some effort since then, but I often catch a wave a little too late. I moved from bootleg cut jeans to skinnies just as everyone was embracing high waisters. Then, as I caught up they moved onto 'boyfriends' and three-quarter length flares.

But this week, my friends, we are DOWN WITH THE YOUTH! We are not only on trend, we bloody invented it.

Research by Eventbrite into the habits of Millennials has been all over the press this week because (shock, horror) it turns out that they don't think drinking is cool, let alone getting drunk.

In fact, they describe it as 'sad' and 'embarrassing.' It's something their parents do. Only one in ten described getting drunk as 'cool,' and 42% say they are drinking less than they were 3 years ago.

For fellow fans of Absolutely Fabulous, while we are Patsy and Edina, clutching desperately to our disappearing youth as we swig Bollinger from the bottle, the under thirties are Saffy, sitting at the kitchen table doing their revision and rolling their eyes at our humiliating antics.

There are many reasons for this trend.

Millennials are far more interested in spending their (small reserves of) cash on new experiences, rather than just another night down the pub (where they might bump into those embarrassing parents).

Instagram, and it's social media pals, have a massive cautionary effect too. Every Millennial knows someone whose life (and career prospects) have been ruined by  photographic or video evidence of something they did when drunk. It's just not worth the risk.

If they do go to a music festival they are quite likely to do so sober, with one in five saying that they drank no alcohol at all over a weekend festival.

An article in The Telegraph on this survey hypothesised that Millennials don't need to drink as much as we did because they are more comfortable with talking about their feelings, rather than suffering from the 'stiff upper lip' of our generation.

Personally, I think that one of the big differences between our generation and theirs is our role models.

My role models, back in the late eighties and early nineties were Bridget Jones, the aforementioned Ab Fab ladies, the girls from Sex and the City and (in the real, non fictionalised world) the 'laddettes' like Zoe Ball and Denise van Outen. Massive drinkers, one and all.

Millennials, however, aspire to be like Kim Kardashian, Zoella and Ella Woodward. WHO DON'T DRINK.

Clean drinking is the flip side of the coin to clean eating.

So, next time you're feeling embarrassed or ashamed about being sober, then STOP IT! You are surfing the zeitgeist, my friend.

I've written a (short) piece, accompanied by a fabulous Bridget Jones clip about this generational gap called WHY DO MIDDLE-AGED WOMEN DRINK SO MUCH?

It's going up on the SoberMummy Facebook page at 6pm (UK time) this evening. I'd LOVE it if you could comment and share, as it'd be great to get a debate going.

(Also new on the Facebook page, a fascinating debate from Good Morning Britain about all those 'wine o'clock' jokes, and whether they are trivialising women's drinking).