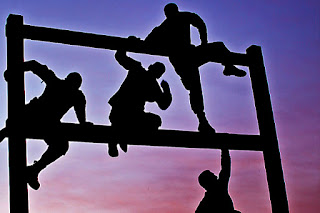 I read loads of sober blogs, and I get hundreds of e-mails and comments from readers of Mummy was a Secret Drinker.

The ones that really make me want to cry, and yell in frustration, are the ones written by people who do the first few days over and over and over again.

They do four days sober, then back to day one. They manage ten days next time, then go on a bender. Three days. Four days again. Ad infinitum.

I get it! I really do. I've been there. We all have. And you do just have to keep persevering until one day it just sticks.

But now, with the benefit of six months of hindsight, I just want to grab them in a big bear hug and yell "Nooooo! You're doing the hardest part over and over, without ever making it to the good bits!"

And the problem is, the longer you spend wallowing around in those early dark days of despair, the more you manage to re-enforce the idea in your subconscious that that's what sobriety is all about.

So, if that's you, then think about it like this:

Imagine you're standing in a field which you've been in for a long, long time. Initially it was beautiful - filled with wild flowers, friends, sunshine and fluffy bunnies (maybe the bunnies are a bit too much? But, hell, I'm going with it).

But, over time, it's got more and more miserable in your field. There are still some sunny days, but there's an awful lot of rain, and some terrible thunderstorms. You keep thinking the flowers are growing back, but they die before they bloom. The bunnies are few and far between.

Then you start meeting people who tell you about another field, not too far away. They've seen it. Some of them live in it. It's everything your field used to be, if not more so. And they appreciate it so much more because they've seen what your desolate home looks like. They used to live there too.

"Hey, come and live with us!" they tell you. Because they're not mean and selfish. They know that there's plenty of room at their place for everyone, and they genuinely want more friends.

You really, really want to join them. But there's a hitch. There's a huge great obstacle course in the way. You can't see the whole course, only the obstacle directly in front of you. And you can't see the promised land on the other side. You have no idea how big the course is, how long it takes to get through it, or whether you're up to it.

But you know that you can't stay where you are. It's only going to get worse. So you take a leap and throw yourself at the first obstacle....

Initially it's not too hard. You've got bags of energy and enthusiasm. But, after you've been over a twelve foot wall, through a leech infested, waterlogged ditch, and dug under a fence with your bare hands you're exhausted. Fed up. You have no proof that this place even exists. You have no idea if you can ever make it that far, and you're desperate to go back to somewhere familiar, where you're not so tired, and cold and scared....

.....so you go back to your field. And initially it's great to be home. The other people stranded there welcome you back with open arms and tell you that the alternative field doesn't really exist. You're comfortable. You know what you're dealing with. You think you can see the sun coming out and a bunny in the distance....

....but you were fooling yourself. There are no bunnies left any more. The thunderstorms come harder and harder. Eventually you throw yourself at the twelve foot wall again. You brave the leeches again. You dig the tunnel. You make it to the fifth obstacle this time before you go back to the beginning.

You go back because you have no proof. You don't know how long it takes. You don't know if you can do it. You're exhausting yourself by doing those first few obstacles over and over again. It's just too hard.

So, if that's you, then listen to this. Because I do know (as do many people reading this who I'm hoping will back me up in the comments below). I am going to say it really loudly:

IT DOES EXIST! IT'S EVERY BIT AS GOOD AS YOU'RE HOPING. IT TAKES ABOUT 100 DAYS TO BE ABLE TO SEE IT, AND ABOUT SIX MONTHS TO GET THERE. YOU CAN DO IT.

The truth is that the hardest bit of the obstacle course is the beginning. So you really don't want to keep re-doing the wall, the leeches and the digging. Once you're through those, the other obstacles get easier, and they're further apart. And you get stronger, and fitter and more able to cope.

One thing to look out for is 'false summits'. Sometimes you think you've got there. You've seen no obstacles for ages, and you think THIS IS IT! Only to be confronted by a whopping great wall. (See my post on Post Acute Withdrawal Symptoms).

But by now you know how to scale those suckers. It's no biggie. You almost start to get a sense of achievement from making it to the other side of each one. After all, a field with no challenges at all in it would be a little....flat and featureless.

So, my fellow adventurers, pack up your bags, say goodbye to your field, throw yourself at the obstacles and KEEP ON GOING! Do not look back until you get to the end!

For more inspiration, read The Sober Diaries. You can read the first few chapters for free by choosing the 'look inside' feature. Click here in the UK, here in the USA and here in Australia.