Is Your Lockdown Drinking a Problem? 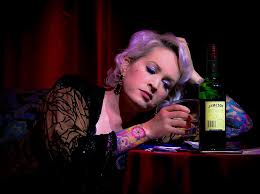 Surely if there's one time when we really deserve a drink or two at the end of the day, it's a global pandemic?

After all, we can't see our friends, go to the pub or out for dinner. How else can we celebrate getting to the end of a difficult day of Zoom meetings and home schooling? So long as it doesn't become a problem...

But how do you know if it's a problem or not?

I, like many people, used to think the answer to that question was black and white. The world, we are told, is divided into 'normal drinkers' and 'alcoholics.' Alcoholics, I assumed, were people who poured vodka onto their cornflakes in the morning and passed out on park benches. If you didn't fit into that category then you didn't have to worry too much about your alcohol intake.

I know now that this is not true.

For a start, drinking issues come in sliding scales of grey.

Just because you don't fit the stereotype of a problem drinker does not mean that your drinking isn't a problem. It can still be giving you insomnia, anxiety, weight issues, relationship problems, compromising your immune system and raising your risks of getting cancer.

Also, just because you never used to have a problem with alcohol doesn't mean you can't develop one.

Many people who contact me for help had no issue with their drinking throughout their twenties and thirties, but then spent much of their forties trying to ignore the increasingly insistent nagging realisation that it had all somehow got out of control.

If you've found yourself waking up at 3am, worrying about how much you - accidentally - drank the previous evening, or Googled Am I an alcoholic? Or clicked on this article because you just want to prove to yourself that the answer to the question in the headline is no, then here are three danger signs to look out for:

1. Drinking for the wrong reasons

Usually, when we start drinking as teenagers, it's a social thing. Alcohol helps us to relax when we're feeling a bit apprehensive and awkward, it puts the swing into a party and gets everyone onto the dance floor.

If you're only drinking as a means of social lubrication, it's unlikely to give you any major problems. Unless, of course, you're going to parties every day of the week. Which is unlikely to be the case right now.

However, if you're using alcohol as a form of self-medication, as a way of dealing with stress, anxiety or depression, then that is an issue.

It's an issue because alcohol only solves those problems temporarily.

Alcohol is a depressant, and over time it increases your anxiety levels and exacerbates depression. And the worse you feel, the more you drink. Before long, you're stuck in a horribly dangerous negative cycle which just sucks you further and further down.

2. Breaking your own rules

When the world was a different place, and most of us left home to go to work, it was relatively easy not to drink too much. You'd have to wait until you got back from the office before pouring a drink.

Now, that's probably not the case, and you've probably set yourself some rules, or guidelines at least.

The rules you choose aren't actually important. What is important is can you stick to them?

If you find that you're constantly breaking your own - perfectly reasonable - rules, then your drinking is becoming a problem.

I used to think that everyone spent quite a lot of time thinking about drinking. I had no idea that people without drinking issues don't really think about it at all. Unless they're offered a drink, it rarely crosses their minds.

However, people like me, who have gradually become addicted to alcohol without even realising it, find that they are spending increasing amounts of time thinking about it.

Am I going to drink today? Do I have enough booze in the fridge, or should I go shopping? Can I justify another glass? Surely I deserve it?

That insistent voice in your head, which anyone with any form of addiction will recognise, just won't go away, and the more you try to stick to your rules, the louder it gets.

If you've read this far, and if you've seen yourself in any of this, then the bad news is your drinking probably is a problem.

There is lots of good news, however.

First off, you are not alone. There is so much help available - much of it virtual. Check out Club Soda on Facebook, Soberistas.com, Janey-Lee Grace's Sober Club and my SoberMummy Facebook page.

Secondly, now really is a fabulous time to quit. Most people find socialising and parties the hardest things to navigate when they first stop drinking, and right now you can happily avoid all of that, and just hunker down with a mocktail, some popcorn and Netflix.

Finally, and most importantly, if you do decide to stop drinking, you'll discover that you're actually not giving up anything at all, but gaining so much. Before long you'll be less anxious, sleeping better, and you'll be so much happier, healthier and more energetic.

If you're at all sober-curious and want to know what to expect if you quit drinking - all the highs and all the lows - then check out my memoir, The Sober Diaries.

And if you're looking for some feel-good fiction as a healthier way of de-stressing and forgetting all about coronavirus for a while, then why not read my new novel (a Radio 2 bookclub pick!) The Authenticity Project. You can read the first few chapters for free using Amazon's 'Look Inside' feature.

Stay safe and well, my friends.

You can find out more about me, or contact me privately, via www.clarepooley.com

Email ThisBlogThis!Share to TwitterShare to FacebookShare to Pinterest
Labels: addiction, am I an alcoholic? problem drinking, coronavirus and alcohol, lockdown drinking