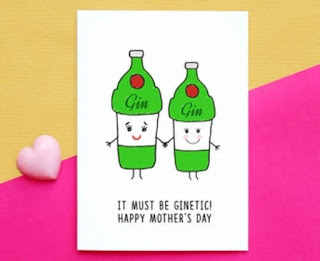 Did your family give you a present on Mother’s Day this year? Breakfast in bed maybe? Flowers? A home-made card?

In the days BS (Before Sober), my three children always knew what to give me as a present, because they knew what Mummy’s favourite hobby was: drinking wine.

So, they’d buy me a corkscrew. A bottle stopper (ironic, since there was never anything left in a bottle of wine once I’d opened it). A giant wine glass with ‘Mummy’s glass’ etched onto it. You get the picture.
This year, my kids gave me a frame, with a photo of me and the three of them inside it. This made me all tearful, as I realised that now my focus isn’t distracted by wine, it really is on them. Not entirely on them, obviously, but more so.
I might not have been given booze on Mother’s Day this year, but an awful lot of women in the UK were.

In the weeks leading up to the big day, retailers bombarded us with alcohol based presents. I saw a bottle of wine branded ‘Mummy Fuel’, wine bangles (hollow bracelets filled with wine) and wine purses (handbags with a built-in wine pouch and a tap on the outside – yes, really).

How did we end up in a place where motherhood is synonymous with wine? Or gin? When did ‘mother’s ruin’ become ‘mother’s little helper’? Why did we all start buying into the myth that it’s impossible to be a mother without some form of anaesthetic?

I had my first child in the early days of this century – 2003. That was when the ‘mummy blogger’ first appeared, and back then mothering was all about perfection. We wanted to do it brilliantly.

We read Gina Ford and The Baby Whisperer. We tried to bake perfect cupcakes and make home-made playdough. We bought organic vegetables and spent hours pureeing and freezing them into little ice-cubes.

And we were knackered.  We felt like failures. Because motherhood is really hard, and perfection is unachievable. You just need to give it your best shot, and forgive yourself.
So, by the mid noughties, the backlash began. The perfect-mum-blogger was replaced by the slummy-mummy.

We cheered! We threw Gina Ford in the bin and bought ready-made baby food from Ella’s Kitchen. We laughed about our failures on Mumsnet. And all of that was a really good thing, but along with it came wine-o’clock.
When we decided to shout about motherhood being difficult, we also started joking about how we managed to cope. And how we managed to cope was WINE.

As social media took off, so did all the wine memes. Wine o’clock. Why Mummy drinks. Mummy juice.

The retailers and marketing departments were really quick to jump on the bandwagon, and then start driving the train. We didn’t feel bad about pouring ourselves a large goblet of wine at the end of a long day, because it was ‘me-time’, we were worth it. And everyone else was doing it too.

The problem is that wine is a drug.

That sentence looks really obvious to me now, but it wasn’t back then. How could something so beautifully packaged, so ubiquitous, joked about all over social media, be an actual drug? After all, you wouldn’t joke at the school gates about being desperate to get home for a line of cocaine, but everyone admitted looking forward to that first glass of wine.

But it is. A drug. And, like any other drug, your tolerance increases over time, so it no longer takes one glass of wine to help you unwind at the end of the day, it takes a whole damn bottle. And when you’re drinking several bottles of the stuff a week, it’s not just your shoulders unwinding, it’s your whole life.

The scary thing is, alcohol does exactly the opposite.
Alcohol made me anxious all the time. It made me rush through bedtime stories so I could get to the fridge. It made me short tempered and grumpy with my kids. And it made me a terrible role model. I was teaching my children that grown-ups need a drug in order to be able to cope with everyday life. To be able to cope with them.
So, this Mother’s Day, I looked at that photo of me with the three of them, looking relaxed, happy, present, not wishing the time away until it was wine o’clock, and I realised that sobriety is the best gift ever, for you and your children.

To read about my first year sober, and for lots of hints and tips, check out The Sober Diaries. You can find it here (UK) or here (USA).

(I wrote this article for Catherine Gray's Sober Spring campaign, in conjunction with Alcohol Change).