Am I Addicted to Sugar? 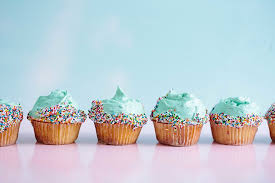 My name's Clare, and I'm a sugaraholic.

When I was drinking (a lot), I wasn't that interested in sugar. I felt quite smug about my lack of sweet tooth. I could inhale a packet of crisps (that's chips for my American friends) from twenty paces, but chocolate? I could take or leave it.

Then, I quit drinking, and hot chocolate and cake became my lifeline.

I have to confess, that over the last few years, that craving for sugar hasn't really diminished. In fact, it's got worse.

In our house, we have cupcake Friday. I don't actually bake the suckers. I'm really not that kind of mother, sadly. But I pick the kids up from school and we go to the local cupcake shop where they sell such beauties as Unicorn cupcakes! With horns and sprinkles.

I swear, eating a large cupcake with lots of frosting makes me totally HIGH.

But then, there's the inevitable crash, an hour or so later. And I've started craving that sugar high more and more.

When I was madly editing my new novel for a Christmas deadline, I spent hours in my pyjamas and Uggs, hunched over my laptop, mainlining mince pies. I kid you not. I ate dozens of those evil temptresses.

I know I am not alone. Many, many people tell me that after going sober they developed unbearable sugar cravings.

Well, it turns out that sugar acts on our dopamine levels in exactly the same way as alcohol, or cocaine, or any other drug.

Dopamine is a neuro-transmitter in the brain associated with pleasure and reward. If you have a tendency towards addiction, it is likely that you are particularly sensitive to dopamine.

When we drink alcohol, or eat sugar, our brains produce a spike of dopamine. Way-hey! The issue is that following that spike, there's a crash, which makes us crave more.

And over time, our brains reduce the amount of dopamine produced naturally to compensate for all the stuff we keep shovelling in, so without booze, or sugar, we feel a bit...meh.

After my Christmas sugar binge-fest, I decided that something had to be done. I needed to moderate.

Is this all sounding horribly familiar?

And, just the same as when I tried those rules with booze, I find myself becoming obsessed by the idea of sneaking down to the newsagent and hiding a cheeky bag of Maltesers (they are mainly air, after all) in my shopping basket, amongst lots of random items that I don't actually need.

I did some research, and there is some good news. There are, it turns out, several ways to produce dopamine in a totally healthy way.

First off, you can eat foods rich in something called tyrosine, like almonds, bananas, avocados, eggs, beans, fish and chicken. Not as pretty as cupcakes, but they do the same thing in a more gentle, less addictive fashion.

You can exercise. Yoga is especially good at producing dopamine, but any exercise, particularly outdoors (dopamine loves sunlight) will do the job.

Make sure you get lots of sleep. If you're sleep deprived, your dopamine levels will go through the floor. That's why you crave sugar when you're tired.

Listen to music! Your favourite tunes lead to an increase in dopamine. Yes, really.

I've been trying these strategies, and they really do work.

So, whether you're craving booze, sugar or cocaine, grab a banana, do some asanas in the sunshine, book a massage and turn the music up, and before you know it, the cravings will go.

Read the story of my first year sober, The Sober Diaries, described as 'Bridget Jones Dries Out.' You can get the first few chapters for free using Amazon's 'look inside' feature. Click here for UK, here for USA.