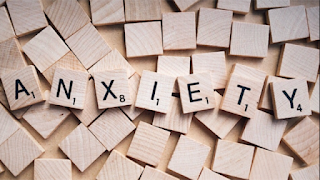 Alcohol and anxiety are so closely entwined that it's difficult to know which comes first. Do we drink because we are anxious, or are we anxious because we drink?

In fact, both are true - one leading to another, creating a downward spiral, sucking us in like a spider down a plughole.

Alcohol gives your brain a dopamine hit, but, over time, it reduces the amount of dopamine it produces naturally to compensate, making you feel anxious and edgy whenever you're not drinking.

The good news is that when you quit drinking your brain will, over time, find its natural equilibrium and start producing dopamine again, all by itself. Woo hoo! Hello happy pink cloud.

The bad news is that in the early days of giving up you'll probably feel super anxious as your brain is missing all the dopamine you used to ply it with.

Added to which, you've been so used to self-medicating your anxiety with booze that you have absolutely no idea how to manage without it.

I was pottering around my kitchen a few days ago, with This Morning playing on the TV in the background.

I was stopped, dead in my tracks, half way through unloading the dishwasher, by Harry Judd - member of McFly and McBusted and winner of Strictly Come Dancing.

Initially, I have to confess, I wasn't even concentrating on what he was saying, I was just thinking OMG, he is just so gorgeous, and so charming, in an embarrassingly hormonal middle-aged mother sort of way.

Then I started paying attention. Harry was talking about how he had been crippled with terrible anxiety, and - as a result - had quit smoking weed and drinking.

He then discovered that the cure for his anxiety and OCD was exercise, leading him to write a book: Get Fit, Get Happy.

I bought the book.

Now I'm even more in love with him.

Harry writes honestly and engagingly about his issues, showing that anyone, however successful, talented and ripped (stop it, SM) can suffer from addiction and mental health issues.

Here's what Harry says about booze:

...I had been using alcohol to allow me to relax at gigs. I'd be hungover the next day, wake up feeling grumpy, have breakfast at midday, stagger to the tour bus and travel to the next venue. I would sometimes be pretty negative to be around and not as welcoming to the fans as I should have been. It wasn't until an hour before the next gig, when I would crack open the first beer of the day, that I would start feeling good about myself again. And so the cycle would continue.

Harry describes how drinking would lead to full on panic attacks and terrible anxiety. So, eventually, he quit. He says:

Kicking the booze was good for me in so many ways: it helped to stem my anxiety and it had a hugely beneficial effect on the way I was able to do my job....I was more positive around the fans and a happier person in general. My routine became healthier.

Harry's book goes on to talk about why and how exercise is miracle cure for depression and anxiety, as well as being great for our physical health, obviously.

There are lots of exercises, categorised as 'beginner', 'intermediate' or 'advanced' which you can fit easily into your daily routine.

This certainly fits with my experience. I found running, walking the dog, yoga, swimming - any exercise really - invaluable in the early days of fighting off the wine witch.

I have to confess, I haven't yet done any of the exercises in Harry's book, but just looking at the (utterly gorgeous) pictures of him doing them has made me feel fitter, and happier. So there we go, job done.

If you'd like to see the interview with Harry on This Morning, it's on the SoberMummy Facebook page.

Also new on the Facebook page is a great Irish article about women's relationship with booze, and one of my favourite inspirational memes.

To read more about (and buy) Harry's book click here.

Email ThisBlogThis!Share to TwitterShare to FacebookShare to Pinterest
Labels: alcohol and anxiety, dopamine, exercise, get fit get happy, harry judd, this morning